Vermilion Energy Inc. Announces the Assumption of Operatorship of the Corrib Project

Effective immediately, Vermilion has assumed contract operatorship of Corrib on behalf of the joint venture partners.  CPPIB plans to transfer SEPIL along with a 1.5% working interest to Vermilion.  This transfer has received all required government approvals and is expected to be completed in the coming weeks.  The estimated purchase price after interim period adjustments is approximately €6 million.

Following the transfer to Vermilion, ownership in Corrib will be as follows:

Vermilion's incremental 1.5% ownership of Corrib represents approximately 700 boe/d at current production rates and approximately 1.8 million boe of 2P reserves(1) based on an independent evaluation by GLJ Petroleum Consultants Ltd. with an effective date of December 31, 2017.  Based on a final purchase price of €6 million ($9.1 million at current exchange rates), the transaction metrics are estimated at approximately $13,000 per boe per day, $5.05 per boe of proved plus probable reserves(1) including future development capital (generating a 2P recycle ratio of 9.4 times based on projected 2018 netbacks(2)), and 0.7 times estimated 2018 operating cash flow(2) using the current forward commodity strip.  Vermilion expects the acquisition to be accretive for all pertinent per share metrics including production, fund flows from operations(2), reserves and net asset value.  In addition, Vermilion expects to receive approximately €13 million of net working capital with the transfer of SEPIL.

Following the assumption of operatorship of Corrib, Vermilion estimates that it will operate 89% of its global production base as compared to 81% prior to the transaction.

Vermilion is an international energy producer that seeks to create value through the acquisition, exploration, development and optimization of producing properties in North America, Europe and Australia.  Our business model emphasizes organic production growth augmented with value-adding acquisitions, along with providing reliable and increasing dividends to investors.  Vermilion is targeting growth in production primarily through the exploitation of light oil and liquids-rich natural gas conventional resource plays in Canada and the United States, the exploration and development of high impact natural gas opportunities in the Netherlands and Germany, and through oil drilling and workover programs in France and Australia.  Vermilion currently holds an 18.5% working interest in the Corrib gas field in Ireland.  Vermilion pays a monthly dividend of Canadian $0.23 per share, which provides a current yield of approximately 8%.

Vermilion's priorities are health and safety, the environment, and profitability, in that order.  Nothing is more important to us than the safety of the public and those who work with us, and the protection of our natural surroundings.  We have been recognized as a top decile performer amongst Canadian publicly listed companies in governance practices, as a Climate Leadership level (A-) performer by the CDP, and a Best Workplace in the Great Place to Work® Institute's annual rankings in Canada, the Netherlands and Germany.  In addition, Vermilion emphasizes strategic community investment in each of our operating areas.

Employees and directors hold approximately 5% of our fully diluted shares, are committed to consistently delivering superior rewards for all stakeholders, and have delivered over 20 years of market outperformance.  Vermilion trades on the Toronto Stock Exchange and the New York Stock Exchange under the symbol VET.

Natural gas volumes have been converted on the basis of six thousand cubic feet ("mcf") of natural gas to one barrel equivalent of oil.  Barrels of oil equivalent (boe) may be misleading, particularly if used in isolation.  A boe conversion ratio of six thousand cubic feet to one barrel of oil is based on an energy equivalency conversion method primarily applicable at the burner tip and does not represent a value equivalency at the wellhead.

(1)     Estimated total proved and proved plus probable reserves attributable to the Assets as evaluated by GLJ Petroleum Consultants Ltd. in a report dated February 1, 2018 with an effective date of December 31, 2017, in accordance with National Instrument 51-101 – Standards of Disclosure For Oil and Gas Activities of the Canadian Securities Administrators, using the GLJ (2018-01) price forecast (the "GLJ Report")

Statements relating to reserves are deemed to be forward-looking statements as they involve the implied assessment, based on certain estimates and assumptions, that the reserves described exist in the quantities predicted or estimated, and can be profitably produced in the future. Such forward-looking statements or information are based on a number of assumptions all or any of which may prove to be incorrect.  In addition to any other assumptions identified in this document, assumptions have been made regarding, among other things: 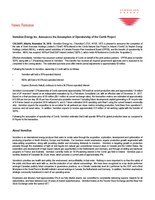