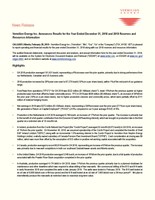 The audited financial statements, management discussion and analysis, and annual information form for the year ended December 31, 2018, will be available on the System for Electronic Document Analysis and Retrieval ("SEDAR") at www.sedar.com, on EDGAR at www.sec.gov/edgar.shtml, and on Vermilion's website at www.vermilionenergy.com.

In 2018, we drilled a total of 148.9 net wells and completed four acquisitions within our existing core areas, including the acquisition of Spartan Energy during Q2 2018, making this our most active year ever in terms of both organic and M&A activity.  As a result, we delivered record annual production of 87,270 boe/d, representing a year-over-year increase of 28%, or 10% on a per share basis.  Similarly, we increased our proved plus probable reserves by 63% to 488.1 mmboe(3), reflecting a year-over-year increase of 31% on a per share basis.

Our 2018 acquisitions added high netback, low decline and free cash flow(1) generating producing assets while also significantly expanding our future project inventory.  We are very disciplined in our M&A approach and apply a rigorous strategic framework, comprehensive technical evaluation methodology, and consistent decision criteria for any assets that we consider in our three operating regions.  Prior to 2018, we had been less active in M&A in North America due to the overly competitive nature of the North American market and consequent lower M&A returns as compared to Europe.  However, market conditions became more favourable under our criteria in North America in 2018, and we were able to opportunistically conclude the Spartan acquisition, a Saskatchewan/Manitoba waterflood purchase, a Powder River Basin stacked zone land and production acquisition, and the consolidation of additional Corrib interest.  These important acquisitions enhanced our margins, reduced risk in our operating and financial profiles, expanded our development project inventory, increased our oper