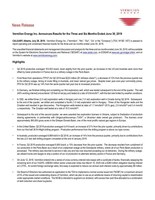 The unaudited financial statements and management discussion and analysis for the three and six months ended June 30, 2019, will be available on the System for Electronic Document Analysis and Retrieval ("SEDAR") at www.sedar.com, on EDGAR at www.sec.gov/edgar.shtml, and on Vermilion's website at www.vermilionenergy.com.

During the second quarter, we conducted our most active exploration drilling program in Europe in the history of the company.  Over the past four months, we have drilled one exploration well in Germany and five exploration wells in our Central and Eastern European ("CEE") business unit, with successes on all but one well in Hungary.  This drilling campaign was preceded by several years of careful implementation of our new country entry strategy.  We entered Germany in 2014 and initially focused on expanding our land position through various acquisitions, farm-ins and government concessions, and we now have approximately 1.2 million net acres of land, comprising about one-quarter of the prolific North German Basin.  The first few years were focused on building our team and executing on low risk development opportunities on the existing producing assets while evaluating future exploration and development prospects.  Following the successful completion of our first operated drilling in Germany this summer, we now plan to drill at least one exploration well in Germany each year over the next several years, targeting other sizable gas prospects in the basin.

We followed a similar approach when we entered Central and Eastern Europe later in 2014.  We acquired land in the Pannonian Basin in Hungary, Croatia and Slovakia through various government concessions and deals with industry partners. Our initial focus was on building our knowledge of the basin and operating environment, while acquiring and evaluating seismic to identify future drilling prospects. This summer's drilling program has yielded four conventional discoveries in Hungary and Croatia in five exploratory attempts.  We look forward to executing the remainder of our Croatian program and to initiating our Slovakian program later this year.

Subsequent to the second quarter, we further expanded our CEE presence as we were awarded two exploration licenses in Ukraine in partnership with Ukrgazvydobuvannya ("UGV", a Ukrainian state owned gas producer) in the prolific Dnieper-Donets Basin.  These two licenses are in close proximity to several multi-TCF gas fields with most of the basin (and awarded license areas) still not covered by 3D seismic.  Entering Ukraine aligns with our strategy to capitalize on opportunities in under-exploited basins by using modern technologies to improve success rates and recovery.

In addition to our Germany and CEE exploration drilling programs, we are also currently preparing to drill the first well (0.5 net) of our two (1.0 net) well 2019 program in the Netherlands after having received permits for these wells in the second quarter.  Netherlands continues to be a strong free cash flow generating business and we look forward to resuming drilling there after a two-year hiatus.

Our second quarter results were negatively impacted by a third-party refinery outage in France which reduced production and forced us to find alternate transportation methods and delivery points for our oil in the Paris Basin, which is the larger of our two producing regions in the country.  Our French team did an exceptional job of contracting for alternate delivery points for most of our production, and conducting the required long-haul trucking and barging in a safe manner.  Despite the refinery outage, which impacted quarterly production volumes by approximately 1,300 boe/d and FFO by approximately $11 million, we recorded corporate production of approximately 103,000 boe/d, little changed from the previous quarter.

We recorded FFO of $223 million in Q2 2019, down 12% from the prior quarter.  In addition to the France refinery impact, the primary drivers for this lower FFO were the timing of crude lifting in Australia, which resulted in an inventory build and lower sales volumes ($8 million impact), and weaker natural gas prices in Europe and North America ($33 million impact).

We were able to mitigate a portion of this pricing variance through our hedging program, particularly in European gas, realizing a $14 million pre-tax gain during the quarter.  European gas prices weakened this summer due to increased LNG deliveries.  However, we have locked in pricing on approximately 70% of our summer European gas at significantly higher prices than the spot price.  The forward price for European gas remains in strong contango compared to the front month price, with the calendar 2020 strip for NBP at approximately $8.50/mmbtu, and calendar year strips for the next three years are currently trading within approximately 1% of where they were one year ago.  While our fundamental view on European gas is that the forward market realistically reflects supply and demand drivers, we are willing to lock in this curve and attendant strong levels of free cash flow and expected project economics.  Accordingly, we have already hedged 65% of our expected 2020 European gas production, with hedges continuing at lower percentages on into 2022.

Since 2003, Vermilion has had a track record of returning capital to shareholders through our monthly dividend (previously a cash distribution during the trust era).  This distribution and dividend stream has been increased four times and has never been reduced.  We also recognize that other forms of returning capital to shareholders, such as share buybacks, may be appropriate to complement our dividend in certain market conditions.  With this in mind, our Board of Directors has authorized an application to the TSX to implement a normal course issuer bid ("NCIB") for a maximum amount of 5% of the issued and outstanding shares of Vermilion.  We intend to use the NCIB to return capital to our shareholders, augmenting our current return of cash through dividends.  We will also continue to allocate a portion of excess free cash flow to debt reduction.

In France, Q2 2019 production averaged 9,800 boe/d, a decrease of 15% from the prior quarter.  Our production in the Paris Basin was temporarily curtailed as a result of a third party refinery outage due to a failure on the refinery's main feedstock line. The Grandpuits refinery, where all of our Paris Basin production is processed, returned to service in late July, and has resumed processing Vermilion deliveries. During the refinery outage, we made arrangements to ship most of our oil to alternate delivery points in France and Germany utilizing trucks and barges. The net impact from the refinery outage reduced our Q2 2019 production volumes by approximately 1,300 boe/d and after-tax FFO by approximately $11 million ($0.07/share) from reduced sales and higher transportation expense.  In addition, approximately $2 million in capital investment was required to put truck and barge loading equipment in place.

In the Netherlands, Q2 2019 production averaged 8,917 boe/d, an increase of 3% from the prior quarter.  The increase is primarily due to the successful completion of our first half 2019 workover and facility maintenance program, which was partially offset by minor downtime.  During the second quarter we received the draft drilling permit for the Waalwijk South well (0.5 net), the second well in our planned 2019 drilling program.  We recently began site construction for the first well of our 2019 program, the Weststellingwerf well (0.5 net), which is expected to commence drilling in August 2019.  Drilling of the Waalwijk South well is expected to begin in Q4 2019.

In Ireland, production averaged 49 mmcf/d (8,201 boe/d) in Q2 2019, a decrease of 4.8% from the prior quarter.  The decrease was due to natural decline and minor unplanned downtime at the Corrib natural gas processing facility.  Since we took over as operator of the Corrib Project late in 2018, operating costs have decreased 14% over the comparative six-month period.  At present, our efforts are focused on evaluating future facility and drilling projects, and optimizing our maintenance activities, including a scheduled plant turnaround in Q3 2019.

In Germany, production in Q2 2019 averaged 3,474 boe/d, a decrease of 8% from the prior quarter.  The decrease is primarily due to unplanned downtime on several operated and non-operated assets, which was partially offset by a full quarter contribution from various well workovers performed on our operated oil assets earlier this year.  During the quarter, we completed drilling our first exploratory well in Germany, the Burgmoor Z5 well (46% working interest).  The well reached a measured depth of 11,480 feet and encountered 125 feet of net pay in the Zechstein carbonate.  The well was tested at the end of July at a final flow rate of 8.8 mmcf/d(2) limited by weather conditions.  The Burgmoor Z5 well has been turned over to ExxonMobil as operator during the testing and production phases.  We also completed and brought on production a non-operated coil tubing sidetrack (0.25 net) during the quarter.

Subsequent to the end of the second quarter, we were awarded two exploration licenses in Ukraine, subject to a final production sharing agreement, in a 50/50 partnership with Ukrgazvydobuvannya ("UGV", a Ukrainian state owned gas producer).  The licenses cover approximately 585,000 gross acres situated in one of Europe's most prolific natural gas regions (Dnieper-Donets Basin).  The new licenses are in close proximity to several multi-TCF gas fields with most of the basin (and awarded license areas) still uncovered by 3D seismic.  The terms of the licenses include a modest capital commitment, back-loaded over a five-year time frame.