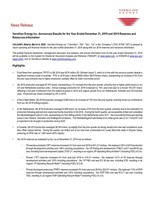 The audited financial statements, management discussion and analysis, and annual information form for the year ended December 31, 2019 will be available on the System for Electronic Document Analysis and Retrieval ("SEDAR") at www.sedar.com, on EDGAR at www.sec.gov/edgar.shtml, and on Vermilion's website at www.vermilionenergy.com.

We are now in the sixth year of a period of reduced energy prices that began in the second half of 2014, with the novel coronavirus (COVID-19) being the latest event to produce a retracement in commodity markets.  Throughout this period, we have maintained focus on profitability by grinding costs out of all phases of our business ranging from field operations to financing expense, upgrading our capital project slate, and adapting our capital markets model to focus even more acutely on returning capital to shareholders.  In this environment, we have been unique among our traditional competitor group in maintaining our dividend while still providing a moderate level of growth.  We have paid a monthly dividend (or distribution in the trust era) for the past 205 consecutive months, returning over $40 per share to shareholders over this period.  During the energy downturn, we have put more production, reserves and free cash flow behind each share despite dramatically lower capital budgets.  While still modestly over 100%, we brought our total payout ratio down to 103% in 2019, representing our lowest total payout ratio since before the financial crisis in 2008.  Moreover, we are phasing out the small level of remaining DRIP participation at the end of Q3 2020, resulting in 100% of dividends being paid in cash.

We are proud of this record of returning capital to shareholders while still providing per share growth.  We think paying dividends is the right thing to do.  This model has kept us disciplined in a capital-intensive industry and has put substantial cash back in the hands of investors.  As we started 2020, our funding status continued to improve to a projected total payout ratio below 100%, driven by a significantly lower capital budget for 2020 as compared to 2019, and by a modestly positive trend for oil prices.  In that environment, we were confident in our ability to continue our monthly dividend at $0.23 while deleveraging our balance sheet.  We were clear in stating that we would reevaluate the dividend in the event of a structural change in commodity prices that could affect our ability to self-fund our combination of capital expenditures and dividends, and that we would prioritize balance sheet strength over other objectives, including either growth or dividends.

The emergence of COVID-19 was an unanticipated event, and we do not claim any special expertise in assessing what the appropriate type or degree of public health responses are to the outbreak.  Nonetheless, we must make an assessment of its current and probable future market and economic impacts.  We observe that COVID-19 has dramatically altered individual, business and government behavior, and that these impacts are decidedly negative for the outlook for global economic growth, commodity prices in general, and oil demand and prices in particular.  We do not believe that the long-term prospects for the oil and gas industry are likely to be significantly altered, and ultimately we expect a resumption of a positive trend for commodity prices.  However, we do think the recovery in oil prices that we began to experience at the outset of 2020 will be pushed back for an unknown period.  In the short-to-medium term, we believe COVID-19 represents a hard-to-quantify set of macro risks, probably lower in economic severity than the financial crisis of 2008, but of a type that is also likely unprecedented in our lifetimes.

We have maintained our dividend though a number of other periods of downside volatility since the commodity crash of 2014, making all of the necessary adjustments to costs and growth levels.  During these periods, we continuously assessed our dividend policy in light of our top priority of balance sheet strength.  As we consider today's economic and commodity outlook, we believe it is unlikely that we would achieve fully-funded status for our present dividend at a reasonable level of capital expenditures.  Therefore, we have determined that a reduction to our dividend is the most prudent course of action at this time.  Accordingly, our board of directors has approved a 50% reduction in our monthly dividend to $0.115 per share, or $1.38 on an annualized basis.  The revised dividend will be effective for the March dividend payable on April 15, 2020.  At the current forward commodity strip, we estimate a 2020 payout ratio of 99%, including previously declared dividends.  Any excess cash generated beyond the dividend and capital requirements will be allocated towards debt reduction at this time, while retaining the option of buying back shares through our NCIB program in an improved macroeconomic environment.

We have had no operational impacts from COVID-19 to-date.  We have business continuity plans for each of our business units and for our corporate center that can be invoked if the outbreak significantly worsens and threatens our supply chain or workforce capabilities.

During 2019, Vermilion generated record cash flow, production and reserves despite a continued environment of challenging commodity prices.  We recorded FFO of $908 million in 2019 on a capital program of $523 million, which translated to free cash flow(1) generation of $385 million, also the highest in our history.  The resulting 2019 total payout ratio, after accounting for dividends and asset retirement obligations, was 103%.  In Q4 2019, we generated $216 million of FFO which was in line with the prior quarter despite a large inventory build in Australia due to the timing of crude liftings.  Net debt in 2019 increased modestly to $2.0 billion, however the net debt to trailing FFO ratio improved to 2.2x, compared to 2.3x in 2018.  In addition to an improving leverage profile, we also enhanced the quality of our balance sheet over the past year.  We have recently received commitments to extend our $2.1 billion covenant-based credit facility, resulting in a new a maturity date of May 2024. The closing of the extension remains subject to customary closing conditions.  In addition, in June 2019, we executed a cross currency interest rate swap on our 2025 US$300 million long-term senior notes, converting our 5.625% interest cost on these notes to 3.275% for the remainder of their term.  As a result of these initiatives, our pre-tax cost of debt today is approximately 3.2% with a weighted-average remaining term of 4.4 years.

We delivered record production of 100,357 boe/d in 2019, representing year-over-year growth of 15%, or 5% on a per share basis.  We achieved these results despite several unexpected operational challenges throughout the year, including a third-party refinery outage in France and uncharacteristic weather-driven delays in Canada.  During the fourth quarter we tied-in two discoveries in Hungary and successfully drilled the Weststellingwerf well in the Netherlands, marking our first drilling activity in that country in two and a half years.  In the US, new well completions from our Q3 2019 program drove increased production from our North American region.  Two months into the new year, the execution of our 2020 capital program is progressing as planned.  To mitigate the risk of another season of post-breakup weather delays, which affected our results in 2019, we are front-loading our 2020 capital program by scheduling most of our North American drilling activity into the first quarter.

Proved plus probable reserves increased by 3% year-over-year to 501.2 mmboe.  The large majority of our new reserve additions were through organic activities as we continue to enhance the recovery factor on existing assets and advanced resources to reserves in a number of our operating areas.  We added these reserves at an organic F&D cost of $9.93/boe, including FDC, resulting in an operating recycle ratio of 3.0x and funds flow recycle ratio of 2.5x.  Our F&D costs have been below $10.00/boe for the past three years (3-year average F&D of $9.38, including FDC), while growing our liquids weighting.  Driven by a capital-efficient project slate and a continued focus on cost improvements, our 3-year organic operating recycle ratio stands at 3.2x.  Our contingent and prospective resource bases remain a source of reserve additions, with 31.8 mmboe of contingent and 5.0 mmboe of prospective resources converted to 2P reserves during 2019.

As we stated earlier, our top financial priority remains balance sheet strength.  Both our debt-to-cash flow ratio and weighted-average interest rate decreased in 2019, and our debt exposures are fully termed-out via our covenant-based bank facility and long-term notes.  Nonetheless, we will continue to be vigilant regarding commodity prices and resulting cash flows.  It remains to be seen how long oil demand and economic growth will be suppressed by the global reaction to COVID-19.  Should we experience an even more-pronounced and protracted commodity downturn due to COVID-19 or any other cause, we will be attentive to all forms of cash outlays, focusing first on capital investment levels, to protect the financial position of the company.

In France, Q4 2019 production averaged 10,264 boe/d, representing a slight decrease from the prior quarter primarily due to weather-driven downtime in the Aquitaine Basin.  Production in the Paris Basin was relatively consistent with the prior quarter.

In the Netherlands, Q4 2019 production averaged 8,088 boe/d, an increase of 9% from the prior quarter.  The increase was primarily due to the restoration of production following planned and unplanned facility downtime in Q3 2019.  During the quarter, we successfully drilled and completed the Weststellingwerf well (0.5 net), representing our first drilling activity in the Netherlands since 2017.  We encountered three gas-bearing zones in the Vlieland, Zechstein and Rotliegend formations.  The Weststellingwerf well flowed at an initial gross rate of 14.7 mmcf/d(2) and is expected to be brought on production during 2020.

In Ireland, production averaged 42 mmcf/d (7,049 boe/d) in Q4 2019, a decrease of 2% from the prior quarter.  The decrease was primarily due to natural decline, partially offset by higher uptime at the Corrib natural gas processing facility compared to the prior quarter.  As disclosed in our Q3 2019 release, we had 10 days of unplanned downtime in one of the plant auxiliary systems, which occurred at the end of Q3 2019 and continued into Q4 2019.  Since assuming operatorship of Corrib at the end of 2018, we have reduced operating costs by approximately 20% and continue to evaluate other optimization opportunities.

In Germany, Q4 2019 production averaged 3,373 boe/d, an increase of 3% from the prior quarter.  The increase was primarily due to improved uptime on our operated oil and natural gas assets, partially offset by unplanned downtime on our non-operated oil assets.  Following the successful drilling of the Burgmoor Z5 (46% working interest) well in 2019, the partner group has agreed to a tie-in plan which should allow for production early next year.

In Central and Eastern Europe ("CEE"), production averaged 276 boe/d following the tie-in of two discoveries from our 2019 drilling program late in the year.  In Hungary, we tied-in the Mh-21 (0.3 net) and Battonya E-09 (1.0 net) wells, drilled in the second and third quarters of 2019, respectively.  The wells were brought on production midway through the fourth quarter of 2019 at a restricted rate of approximately 600 boe/d net for the two wells combined.  In addition, we were provisionally awarded the Kadarkút exploration license in western Hungary during the quarter and we expect to receive final government approvals in the first quarter of 2020.  The license covers approximately 298,500 net acres and consists of primarily oil prospects.  Most of the license is covered by 3D seismic.  The license term covers a four year period, with the option to extend the license for a further two years.  In Croatia, we continued to prepare for our 2020-2021 drilling programs, in